Blog: The side effects of delaying the Olympics

In a series of blogs, the Dutch Women’s Eight rowers share their thoughts about their road to the Tokyo Olympics. Unfortunately, Tokyo 2020 officially has been postponed due to the global Covid-19 pandemic. Fortunately, new dates for the Games have been set on 23 July to 8 August 2021.

During the Corona lockdown the rowers had to deal with the disappointment of canceled tournaments and training camps, and they faced different training conditions. A year's delay to the Olympics has a significant impact on the lives of the athletes. In this blog, rower Hermijntje Drenth shares her story.

Even though European and World Championships are beautiful and important tournaments, for many professional athletes the Olympic Games are the ultimate goal. In the run-up to the Games, life is structured into a cycle of four years.

The cycle starts with a post-Olympic year, in which sports are a little in the background and there is more focus on the professional career. There is time for study or a part-time job, and friends and family get more attention. In the second year of the cycle, there is more focus on sports, but there is still space to work on your career. In the third year it is important to become part of the team and you need to be among the best. For this goal, you do continuously fewer side activities. You skip parties, see your friends and family less, work or study less hours and you rest more. In this so-called Olympic year, there is no room for studying or working. You want to perform optimally during every training and therefore you join trainings well-prepared and well-rested. After each training, you take time to evaluate the practice and you do not want to be rushed. In between trainings you take as much rest as possible, so you can be extra focused during next training. It is relatively easy to cancel on (social) activities during this year, because you know that there will be plenty of time after this period. But, during this Olympic four-year cycle, everything is different!

Back to winter mode

We were well under way in the Olympic year. We survived the long, windy and dark winter and we arrived in spring at our fittest. It was time for the best period of the year: tournaments abroad and training camps in Northern Italy. Those are the great things we work hard for, why we do not (yet) choose to have a 9 to 5 job and why we say ‘no’ to parties, family and friends. Disappointment is an understatement for what we felt when tournaments and training camps were cancelled.

During the Corona lockdown period, we went back to winter mode and trained indoors on the rowing machine, while the weather outside was wonderful. However, the cancellation of the season and the postponement of the Olympics did not only affect our day-to-day life, also our future dreams and plans after Tokyo were postponed.

Certain rowers were supposed to do their internship this year, because otherwise their study points would expire. Others were supposed to start a new study program or signed full-time job contracts. Long holidays with partners or friends were booked and moving or even family expansion plans were made. Promises to employers, partners and families were made and of course, everyone involved understands the current situation and it is ‘just’ one extra year. However, if you’ve been living in a four-year cycle and have counted down from three, to two, to just one more year, another year can feel like quite a long time.

Back to the future

The positive side of the past events is that we have spent a lot of time at home, with partner, friends or family for the first time in years. Where we were supposed to be abroad two weeks a month, we were now home for months in a row. Besides, we had plenty of time to evaluate and think about our lives. Each of us could make up their own mind and make their own decisions.

For some of us, adding an extra year to the current cycle was no problem. For others, it was 365 days too much. As a result, fellow rowers Monica Lanz and Lies Rustenburg have decided to pursue other plans and dreams. Some of us chose a path in between and have picked up a part-time study, internship, or job besides the intensive training schedule. By now, almost everyone has found their way in the new situation and the new rowing season is getting shape. Full of renewed motivation and energy, we have restarted joint training and are ready for the new Olympic year! 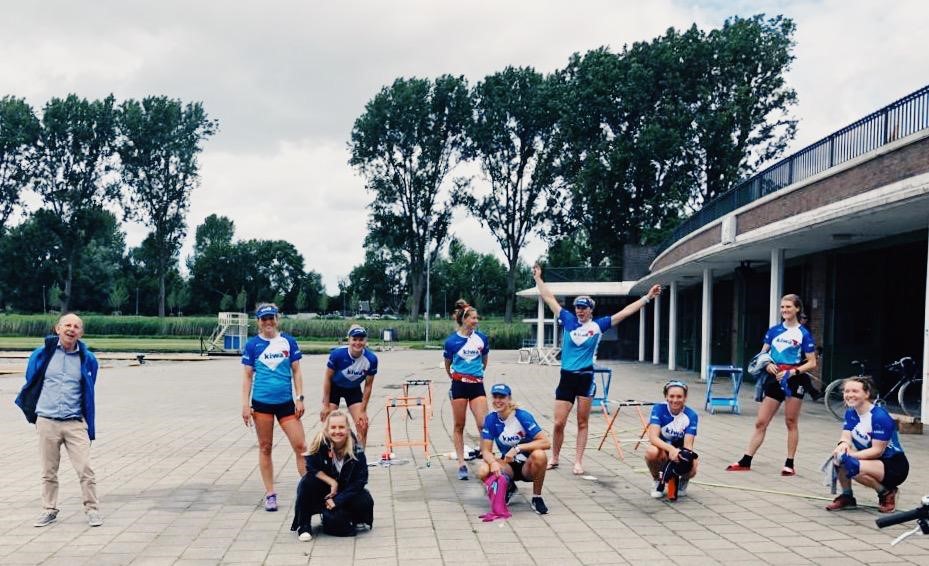 Why we support the Dutch Women’s Eight rowing team