With the GoforZer0 programme, Belgian network provider Elia has maintained a strong focus on the safety of its business processes and employees over the last few years. Independent certifying body Kiwa Belgium has now awarded Elia for these efforts with the prestigious international Safety Culture Ladder (SCL) certificate. The network provider is the second Belgian company to receive this recognition. At the same time, it is the first time it has been awarded by Kiwa Belgium. In other European countries including the Netherlands, France and Germany, the SCL already forms a point of reference. The SCL level 3 certification shows that Elia aims to embed safe working practices permanently into the way it works.

The Safety Culture Ladder was developed just ten years ago by the Dutch railway network manager ProRail and has since been used outside the rail sector by companies aiming to work structurally on security and safety practices. In addition to Belgium and the Netherlands, the SCL methods are also being used in Germany, France and Norway. Furthermore, the SCL is set for use in the Dutch construction sector from next year onwards as a mandatory component in many tenders and contracts.

In Belgium, Elia operates a high-voltage grid of between thirty thousand and four hundred thousand volts covering a total of almost twenty thousand kilometres of overhead, underground and undersea cables. Due to its geographical location in Belgium, Elia is also an important international player. The company manages a cable connection to Britain and a number of offshore windmill parks. Elia employees are often active in risky working conditions, meaning that safety has been an important issue for network managers for a number of years.

Preventing safety incidents in the workplace received an added impulse following two fatal industrial accidents in 2014. Because Elia never wants to experience that again, the company started the GoForZer0 programme five years ago. In addition to improving operational tools and procedures, Elia also focused on improving safety awareness among its employees. It did not only involve technicians in high-voltage pylons, but also office workers.

To an even higher level

Once the GoForZer0 programme had been on a positive trajectory for a few years, Elia decided to make its safety level transparent. Through the Dutch network operator Tennet, Elia was introduced to the Safety Culture Ladder. The SCL system fitted in well with Elia’s requirements, and the maturity scale with five different safety levels helped the company make the current situation and future ambitions transparent. Not only did this help Elia maintain the current SCL certification, but also to further develop it to SCL level 4.

With the Safety Culture Ladder, which is now also being offered by Kiwa Belgium, organisations can measure how employees deal with health and safety, and how safety processes are connected with this. For organisations aiming to improve their safety level, interviews and observations are used to make the current situation transparent and linked to an SCL step. By actively working on improvement in safety awareness, an organisation can work towards a higher SCL step and be certified by an independent, recognised body such as Kiwa.

Ben De Graeve, director of Kiwa Belgium, takes pride in the fact that Kiwa was awarded the SCL certificate. “Every year, there are several thousand industrial accidents in Belgium, so it is no surprise that companies continue to invest in safety. Kiwa has specialised in certifying safety in the workplace for many years. This is done via the Safety Culture Ladder and also using VCA and ISO 45001 certification. The concept of “safety” is developing rapidly. The SCL is an ideal way of testing safety and in doing so, inspiring companies to improve their safety. This can now be applied in Belgium”. 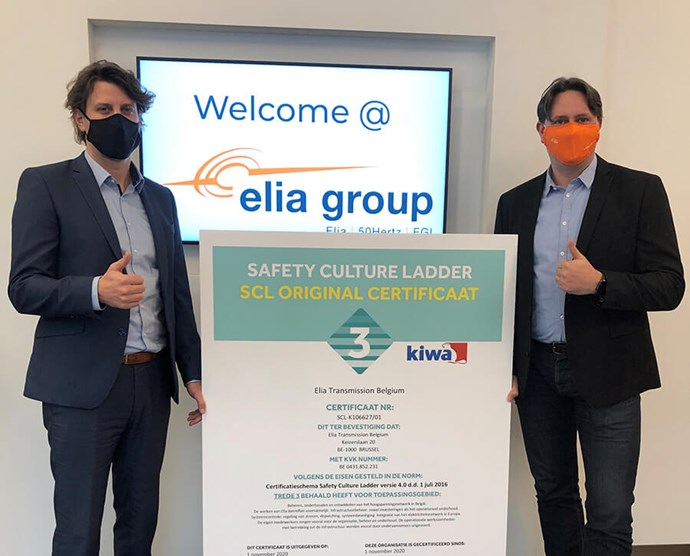 With the Safety Culture Ladder (SCL) you can measure the safety awareness within your organisation and thereby improve the safety culture.