Fertilizer producer ICL (Everris International B.V.), supplier of plant nutrition and fertilization solutions for the agriculture, fruit and vegetable sector, the ornamental plant sector and golf and sports fields, was issued the first FPR certificate by Kiwa Verin on 12 April. Kiwa VERIN recently obtained full accreditation for the Fertilising Products Regulation (FPR) (EU) 2019/1009, the CE marking for fertilizing products, which will come into effect on 16 July.

The European Commission presented the FPR scheme in March 2016 as part of the EU action plan to promote a circular economy. Until now, the sale of mineral fertilizers in particular was regulated within the EU. The FPR aims to provide a strong incentive to use fertilizers made from recycled or organic materials and utilize them as crop nutrients.

For Kiwa VERIN, ICL's FPR certification is not only the culmination of the accreditation process, but also symbolizes the actual start of the implementation of the FPR at manufacturers of fertilization products. Under the FPR scheme, only fertilizers that meet strict quality and safety standards may be freely marketed throughout the EU. Approved products can be recognized by the CE marking. The new scheme offers opportunities for the large-scale production and marketing of a whole range of fertilizers, including organic and mineral fertilizers, organo-mineral fertilizers, growing media, soil improvers and biostimulants.

During the accreditation process, Kiwa VERIN performed a number of (pre) audits at fertilizer manufacturers, including the ICL factory in Heerlen, the Netherlands. The driving force behind the implementation of the FPR and the certification process within ICL is Patricia Grolleman, EU Regulatory Affairs Manager at the company. She was not only involved from the start in the implementation of the FPR within ICL, but has also been involved for many years with one of the European industry associations of fertilizer producers, Fertilizers Europe. In this role she also actively contributed to the creation of the guidelines for the labeling of EU fertilizers. On 12 April, Patricia received the first FPR certificate from Geralda Hop of Kiwa VERIN. Patricia Grolleman 'It took a long time before there was a Notified Body for the FPR and we are happy that it is finally here. With the certificate we have made a start with the implementation of the CE marking legislation. There is still a lot of work to be done and we are going for it!’ 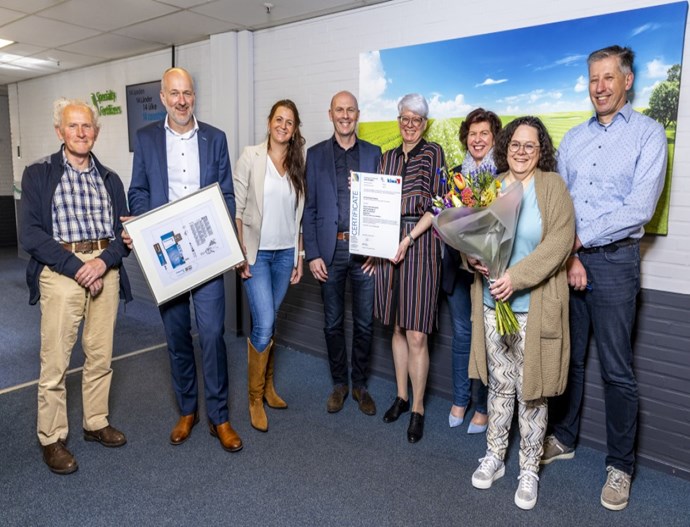 After years of closely following the development of the scheme, Kiwa VERIN has been actively involved in the accreditation application since 2020. Because Kiwa VERIN was one of the first Notified Bodies for this scheme and since no standard assessment and certification protocol was yet available, Kiwa VERIN has also done quite some pioneering work in this regard. The company could fall back on extensive experience with various other schemes that it has set up and is currently working with.

Exchange of knowledge and experience

The experience that Kiwa VERIN gains in the development and implementation of new quality systems is also actively shared within the recently established Coordination Group of Notified Bodies. This involves sparring with other certification authorities in the area of ​​certification. In addition, Kiwa VERIN has been involved for some time in the Dutch FPR implementation working group, in which the latest developments regarding the scheme are discussed with producers, sector organizations, government and scientists. This is necessary because the FPR is still a work in progress in some respects. For example, various additions to the regulation are currently being worked on, such as a list of animal by-products that may serve as raw materials for fertilizing products.

Fertilising products which meet the quality and safety standards of the FPR may be freely marketed throughout the EU.