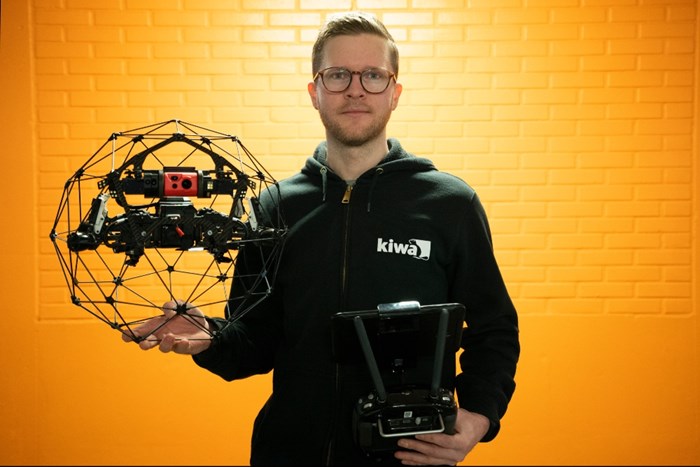 The buzz of a drone flying overhead is increasingly familiar, as more and more people own them for personal use. According to the European Commission, within 20 years, the drone sector in Europe is expected to employ more than 10,000 people and have an economic impact of over €10 billion per year. Drones have much wider applications than taking aerial footage. In Sweden, Kiwa has been working with drones since 2017, using them during outdoor and indoor inspections.

Emil Tjäder moved from northern Sweden down to Stockholm many years ago and started his own company as a welder. He ran that company for seven years, then needed a change. “I get bored and want to do something else, so I studied to become an inspection and testing engineer,” he said. “I wrote my thesis about drone inspection for Inspecta. When I was finished with this, they asked me to help them implement the technique in their inspections.”

Today, Emil is responsible of drone services at Kiwa Sweden. He started working with Inspecta (now Kiwa) in 2016, and they flew the first drones in 2017. At the time, there were already some groups flying drones for outdoor inspections, but Emil and the Kiwa team wanted to use them indoors, in inaccessible spaces.

Drones are a relatively simple for outside visual inspections, for structures such as wind turbines, tower cranes, bridges and building roofs. Kiwa uses drones to gather visual information confirming surface protection or spotting corrosion damage, wear or build-up of deposits. Traditionally, humans would have carried out these inspections, often at high risk and financial cost.

Using drones circumvents the need for expensive scaffolding for human access. Instead, the drones can fly to certain areas and photograph or film surfaces and components. Drones designed for outdoor use have cameras with a 30x zoom function, so they can maintain a safe distance from the structure being inspected and still gather detailed, high-resolution images.

Indoor inspections are a different story. Emil and his team use specially-designed drones to inspect the inside of storage tanks, chimneys, boilers, pipes and vessels – and the occasional storage cavern. “The main objects we’re flying inside are boilers, and they can be pretty tough because in some places there is a lot of dust,” Emil said. “Sometimes it’s like going through a labyrinth – you need to know how to get out.”

The drone Emil and the team use for indoor inspections is called the Elios 2, made by Swiss manufacturer Flyability. In the early days of his work with drones, Kiwa had found Flyability online and saw they had a special drone for use indoors. He contacted them and joined the Product Advisory Board, which is an ongoing collaboration. Over the years, Kiwa has tested prototypes and provided feedback on various aspects of the technology.

Elios 1 was a carbon fiber cage with gyro suspension, so the cage could move freely around the drone. When the drone flew in small spaces, there was significant turbulence, causing it to bounce around like a ping pong ball. Since the camera was inside the cage, it meant the cage would spin around in view of the footage.

The upgrade to Elios 2 saw these problems solved. The cage is still there, to house and protect the technology, but it is fixed so does not spin in front of the camera. There are also sensors all around the cage that can measure the drone’s distance from its surroundings, helping prevent collisions into walls and compensate for turbulence.

Here you can see a side-by-side comparison of Elios 1 and Elios 2.

From a safety point of view, using drones means not having to send people into spaces that maybe difficult or dangerous to access. Connected to this, it also means scaffolding will probably not be needed.

“Building scaffolding is a really big job; companies can spend tens of thousands of euros over several days to do it. And imagine a confined space – it’s difficult to get all the material through a manhole and then build a 20-meter-high scaffold inside the object.”

Of course, scaffolding may ultimately be needed. If the drone spots damage, it will either need to be monitored or further investigated and treated. “In many cases, scaffolding isn’t needed for a visual inspection. Sometimes the drone is enough, making it a quicker and cheaper process that companies can do more often,” Emil said. “People think that that drone inspections are replacing traditional inspections, but most of the time, it’s just a complement or used in combination with our other services.”

One of Emil’s most memorable inspections was of a cavern previous used for storing oil. Instead of having an oil storage tank above ground, the company used a huge cavern. But it had been out of use for some time and needed to be checked before being refilled. In particular, the company wanted to look at the bottom of the cave to check the heating pipes that had not been in use for 30 years.

It was a challenging inspection and the stakes were high: if anything were to have happened in the cavern, the team would not have been able to retrieve the drone. “The space was huge down there – it was several hundred meters long with branched corridors to the sides. It was important to know where you were and that you had enough batteries to get back out again,” Emil said. “Even though the space was large, you had to be careful not to get stuck on anything, especially near the manhole where there was some reinforcing steel protruding from the walls. It was pretty scary down there, but it was a cool space to fly in.”

The future of drone inspections

Emil predicts that drones will be more autonomous and more common in most sectors.
Technology is developing very fast in the drone industry, and new solutions and areas of use are being found all the time. One method that has become more common is to scan objects or entire facilities in three dimensions to create a ‘digital twin’.

“In recent years, we started to perform more missions where we scan the object with photogrammetry or laser to be able to generate 3D models. The 3D models have many purposes and are very helpful in reporting. They give a clear picture of what has been inspected and where deviations are located on the object. This approach is also good when there are no drawings for the object or for planning repairs, because it shows the real environment and its surroundings as it is."

“In the beginning, many people thought it's just a toy, and that inspections could only be carried out by physically putting your hands on the structure. But in the last few years, we have seen that this is a really good tool for visual inspections. We are constantly looking for new inspection technology that could help us in our work with safety and efficiency. There are a few more technology development projects underway, but unfortunately, I can’t reveal too much yet.”

Emil and the team at Kiwa are keen to continue leading the use of drones for inspections by exploring opportunities as the technology develops. Anyone who is interested in finding out more can contact Emil. Please visit the Kiwa Sweden website for this.

Kiwa's inspection engineers used the Elios 2 drone to inspect a huge decommissioned oil cavern. The inspection would have required six months if conducted manually, but with the Elios 2 it was completed in just a few days at a significantly lower cost. Watch the video below to see how they did this.

Our stories offer you insights into how Testing, Inspection and Certification (TIC) bring value, trust and progress.

It was pretty scary down there, but it was a cool space to fly in.