End of the Olympic dream: taking on new challenges at full speed

The 16th of May 2021, we raced for our Olympic tickets at the Final Olympic Qualification Regatta in Lucerne. Every woman on the team had been working every day for months, if not years, with this specific moment in mind. As it got closer, it was difficult to think about anything beyond the race; it felt like we were heading towards a fork in the road where a top two finish would launch us on a defined and much anticipated mission to Tokyo, whereas any other outcome would force us to put our Olympic dream on hold and follow a murkier, less appealing path.

My name is Nika Vos, one of the new additions to the squad. Going to this regatta, famously nicknamed “The Regatta of Death”, was a lot to take in. I had never experienced such a pure make-or-break, win-or-lose moment. It was thrilling to have such a clear purpose and to feel that laser focus building in the team. To witness all these fierce women prepare to be their best and deal with the pressure in their own way. Based on previous races, we believed we had a chance, which was kind of terrifying but also made the lead-up feel alive with possibility.

We hadn’t really thought about not qualifying; the prevailing strategy had been to focus on the positive outcome. So when we could not keep up with the Chinese and Romanian eights despite giving everything we had, it was strange to realize that we weren’t going to become Olympians this year. There was definitely disappointment, but the simple truth was that we weren’t fast enough, and that made it oddly easy to accept. And so we did the only thing we could do: take the unknown path and get moving. Literally.

After the regatta, we still had a whole day in Lucerne, and to make sure we wouldn’t spend it sulking we decided to go for a hike in the Swiss mountains. There was no one else around and we came across breathtaking views around every bend. The pressure was off and it was wonderful to relax and mess around together. It may seem trivial, but that day really helped me put things in perspective. I came down feeling grateful and proud to be a part of this team, and excited for new opportunities.

In the next few weeks, we all got the chance to go at our own pace. Not having that straightforward, common goal of Olympic qualification anymore presented a new challenge; everyone had to transition out of tunnel vision and find new footing. As a team we quickly set our sights on the World Championships in Shanghai in October, where we plan to take all that we’ve learned and be faster than ever. In the short term, many of us took to a familiar place to switch up training and reconnect with friends: our rowing clubs.

And so it happened that four weeks after the qualification regatta, a bunch of us lined up at the start of a very different race. This time, we weren’t all in a boat together, but we got to race each other at the pinnacle event of Dutch student rowing; the Varsity. Every club sends their best four student rowers, and so I found myself there together with Elsbeth, who is from the same club, ready to try and beat our teammates for the illustrious Varsity win. It was the first domestic race to be organized after lockdown. Everyone in the rowing community had missed the dynamic of competition, so all participants received incredible support and enthusiasm. When we managed to cross the line first and take the win for our club for the first time in fifteen years, it was unlike anything I’ve experienced before. I never knew a club could explode with pride like that!

Clearly the aftermath of the qualification regatta has not been what I expected. Of course, I wanted nothing more than to go to the Olympics in the women’s eight. But, to throw around some clichés: the journey doesn’t end here. We’ve got a long way to go, and meanwhile there is so much inspiration and motivation to be found outside of achievements at the highest level. Here comes Shanghai, and there comes Paris. 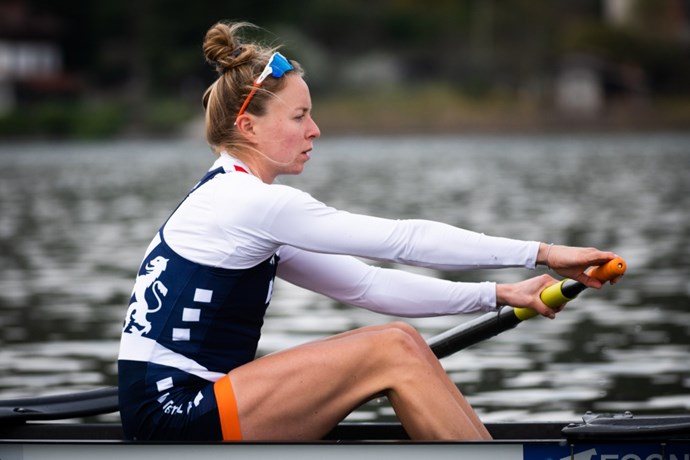