While everyone back home in the Netherlands had their ice-skating adventure, we had our own kind of adventure: our first foreign training camp of 2021. It feels like ages ago we planned things like this and with every recent COVID-development it’s still exciting: will everything go as planned, or should we change our plans last minute once again? I only dared to believed we would actually leave the day before departure in case it would get cancelled.

On the first of February we gathered at Schiphol Airport for departure to Seville, so far so good. For three weeks we would be soaking up some sun, making miles in the eight and coming back home with a final line-up for the upcoming season. Our team has had some additions, as Tinka told you in the most recent blogpost.

So, with 13 girls and of course our coxswain and coaches we left for Seville. We had a PCR test in Amsterdam and on the airport we had to fill in several health check forms to pass security. Arriving at the airport, it turns out our return flight on the 18th  of February was cancelled: no flights will depart from Seville anymore due to COVID-19. Luckily our team manager already arranged a new flight before we took off.

A training camp like this is always a bit more exciting than others. Because we have thirteen girls competing for a spot in the eight, you know the result at the end of the camp will not be satisfying for everyone. On the other hand going to Seville always feels a bit like coming home: it’s a destination we all know for several years now.

We started the camp with a team meeting about the upcoming weeks. Every three days we will change the line-up in the eight and we will have special equipment on the boat to measure force and acceleration per person, but the main goal of the camp is to train good and make the hours count.

Life on camp is easy and simple: everything is arranged so you can have the full focus on that what is important for us. And that is also the hardest part: every hour of the day is about rowing and all its peripheral matters, even more than back home. And even when you get to your hotel room the conversation is very likely to be about rowing. Luckily I’ve got a roomie who also loves to distance from rowing through getting all excited about the new episode of ‘Heel Holland Bakt’ (a Dutch TV show about baking), laughing about funny videos or telling me a bed-time story which is followed by a strange conversation.

The rest of the group also likes to play games, but I can proudly say I managed to get out of every game-playing session. I made an exception to my anti-game-modus for the escape room which was planned by Kiwa as teambuilding event. Besides games, some have to study in between training and two of the team had brought a guitar to learn to play, but I am not sure how many minutes are actually spend on this new hobby.

Most rowing or training venues are on a remote spot. Special about Sevilla is that the river we row on meanders through the actual city. During training you pass several beautiful bridges and on your way rowing down the river you will see many different parks and spots with Spanish people enjoying the weather alongside the embankment while we’re making our miles. It’s also fun to spot the many turtles sunbathing on branches in the water during a technique session in the basin. Due to corona, it is not possible for us to see or visit the city up close in any other way this year. Our living environment is mainly limited to the hotel and the rowing course, which is a small 500 meter walk.

We finished this camp with the goals set accomplished. We did had some sickness and a few injuries in the group, so not all could be tested as planned. But after two weeks the decision for the eight has been made: with Marloes and Nika as additions to the eight we have a line-up for the season. Of course, you never know what’s going to happen, but we are full of trust about this crew.

The next few weeks we will sharpen the edges to make sure we will be at our best at the first measurement: the European Championships in a few weeks. Time to make a statement and leave no doubt: we belong at the Olympic final in a few months. 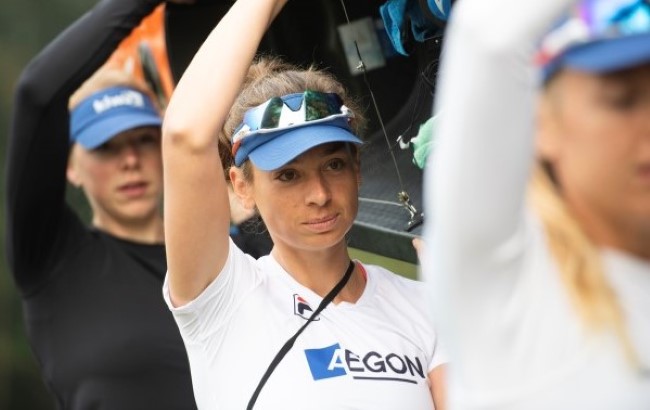