The first international rowing tournament of 2021 was a success for Kiwa’s rowing ladies. They took a golden and silver medal home from the European Championships at Lago di Varese (Italy).

Three in a row

Veronique Meester, Ymkje Clevering, Karolien Florijn and Ellen Hogerwerf managed to dominate again in the coxless four. After a good race on Friday in the heats, they were too strong for the competition in the finals on Sunday as well. With an exciting sprint, they stayed ahead of the Irish boat by 0.45 seconds. With this golden medal in their pocket, they are now European Champions for three years in a row. Well done!

For the Dutch women’s eight it was a successful weekend as well. They made good progress in the last months and were awarded with a silver medal for their efforts. But they were very happy as well with the fact that they are even closer to their biggest competitor Romania in comparison to the European Championships in 2020. That offers perspective and confidence for the upcoming year.

In the coming weeks, the eight will prepare for the Olympic Qualifying Tournament (May 16-18) in order to obtain an Olympic ticket. They hope to make some extra steps during an training camp in Pusiano (Italy) so they can seize one of the last two available spots for Tokyo. The four already qualified for the Olympics in 2019, but wants to have some extra racing experience to prepare for this summer. That is why they will start at the World Cup on May 21-23. Both tournaments will be held on the rowing course in Lucerne, Switzerland. 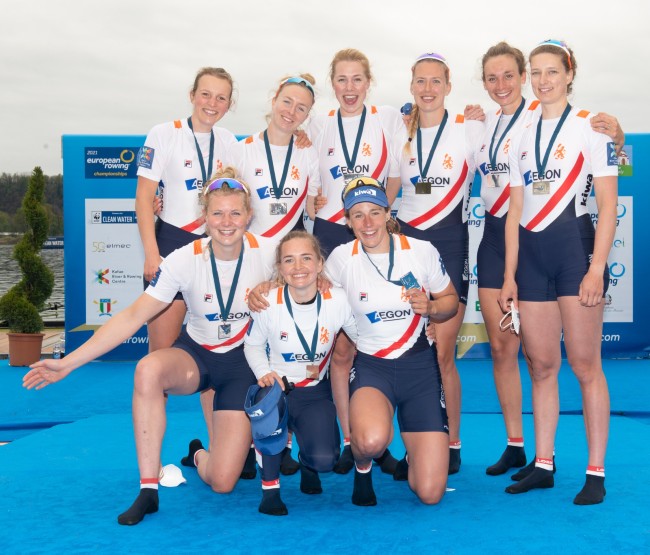