Within a few days the European Rowing Championships will kick-off in Varese, Italy. Kiwa’s rowing fleet did everything they could in the last months to prepare themselves in the best possible way. How are they doing?

Well, a lot has happened in the first three months of 2021 for both crews. When we look at the women’s eight (W8+) we see the team showed good progress during the European Championships in 2020, but it also became clear that some steps still needed to be taken to qualify for the Olympic Games. That is why during an training camp in Seville two new ladies have reinforced the team. This tournament will be their first opportunity to race together, but at the same time it will also be the final rehearsal for the important Olympic Qualifying Tournament in May.

Dieuwertje den Besten, rowing in the eight, explains how they prepared for this exciting race: ‘we will be ready at the start of the European Rowing Championships and confident of our abilities and limitations. Right now we are, as a team, giving everything we have to make our dreams come true. Both physically as mentally, because top sport is not only about training hard and making a lot of kilometers. The mental aspect and the team vibe are also extremely important. By understanding our differences we can turn them into strengths that bind us together even more.’ Want to know more? Read Dieuwertjes latest blogpost.

For Kiwa’s other team, the coxless-four (W4-), it is a slightly different story. They still race in the same line-up as last year and therefore know what they are capable of, but honor is at stake. At the last European Championship they ended up on top of the podium with a golden medal. Will they be able to maintain the position in this important Olympic year? Where do they stand in relation to their competitors? In any case, it is a great opportunity for the crew to gain confidence on the way to the Olympics, because these four ladies already qualified themselves.

Kiwa wishes both teams the best of luck in Italy! 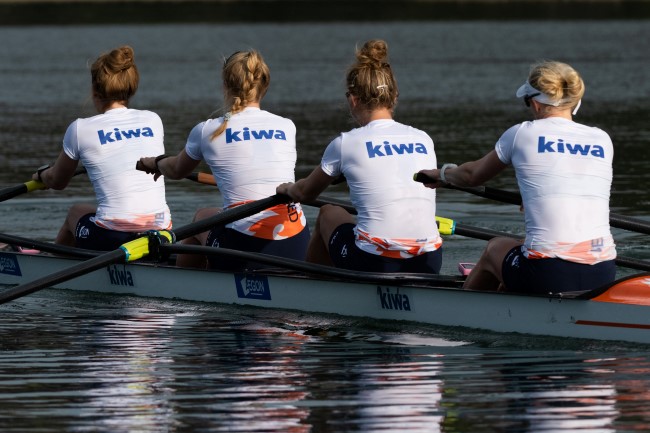