Kiwa KOAC is specialized in all kinds of road measuring activities, for example skid resistance and (un)evenness of road pavements. Since 2015, our colleagues already operate Europe’s largest skid resistance device, which not only measures skid resistance, but road texture and longitudinal unevenness as well.

This vehicle has now been expanded with even more bells and whistles: a 3D laser scan device that measures transversal unevenness, rutting and cracks in the pavement. Eelke Vromans, unit manager Road Testing at Kiwa, “By combining these systems into one truck, we can now collect all functional properties of any road track in only one go, instead of 3 to 4 runs with different vehicles. This means not only a far higher efficiency level, but also less CO2 emissions and less traffic disturbance.” 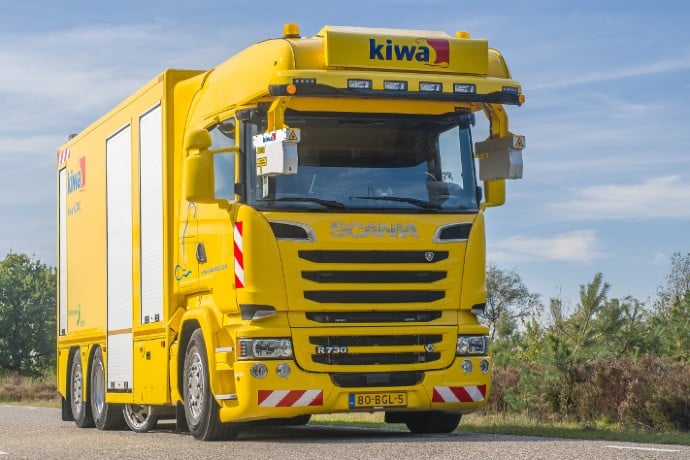 The biggest challenges when integrating all subsystems into one vehicle were not only handling the enormous amount of data (3-5 GB per kilometre; production capacity up to 300 km/day), but also the positioning of the various sensors. “These sensors had to be mounted in such a way that none of them influenced any other in a negative way”, says Vromans. “For instance, the water track created during skid resistance testing must not affect the 3D laser scanners, which need a dry road surface to operate correctly.”

Another challenge will be the development of software tools that unlock the full potential of the collected data. “It has an incredible level of detail; we’re only scratching the surface of its possibilities”, according to Vromans.

Contributing to a better highway network

Kiwa is very proud of its high-tech measuring truck. Last week we presented the truck to road authorities throughout Germany. In the more than 2000 km long tour, we visited Münster, Berlin, Nürnberg, Augsburg and Bochum.