The Ocean Cleanup is a Dutch initiative to clean up the plastic trash in the oceans. For this the organization uses a long half-circle plastic floater. This encloses the plastic, after which it is collected by a ship and removed for recycling. The first version of this cleanup system was damaged earlier this year when part of the catch arm broke off. After material fatigue turned out to be the cause, The Ocean Cleanup turned to Kiwa for material analysis and advice.

For The Ocean Cleanup, Kiwa conducts research into the properties of high-density polyethylene (HDPE), the material of which the cleanup system’s floater is made. ‘That floater is constantly exposed to movement and loads caused by seawater, waves, weather and wind’, says Kiwa’s consultant materials Ernst van der Stok. ‘Currently there is insufficient knowledge about how the used HDPE behaves in the special circumstances in which the cleanup system has to do its work, especially when it comes to the mechanical and dynamic loads in the ocean. With our test program we want to supplement that missing knowledge to enable The Ocean Cleanup to develop an improved version of the system.’ 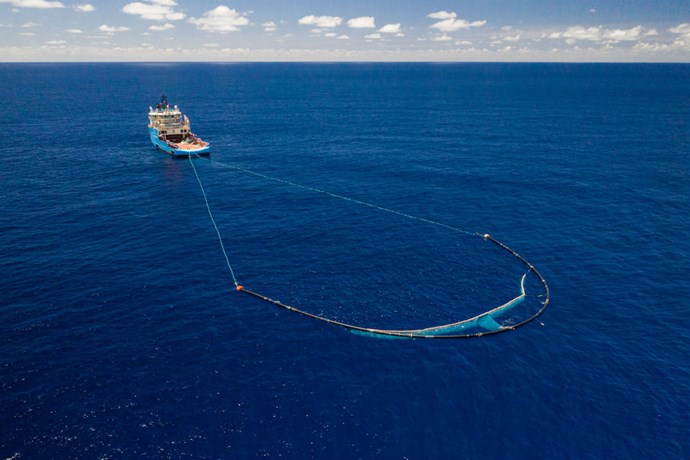 The Ocean Cleanup called in Kiwa for an extensive test program consisting of various mechanical and dynamic tests. ‘Kiwa is one of the few material research centers that can perform these kinds of tests and provide The Ocean Cleanup with data they can use for further processing and models’, continues Van der Stok. ‘For example, we perform tensile tests at different speeds, with constant stress and strain, with varying loads and at different temperatures and compression tests.’

The Ocean Cleanup was founded in 2013 by the Dutch inventor and environmentalist Boyan Slat. Slat developed the first version of the technology in 2012. Through crowdfunding, he subsequently obtained the money for a prototype, which was placed in 2016 off the coast in the North Sea. After a five year test period, The Ocean Cleanup officially started early September last year in the so-called Great Pacific Garbage Patch, a ‘plastic soup’ area three times the size of France in the Pacific Ocean between Hawaii and San Francisco

For more information about The Ocean Cleanup, please visit www.theoceancleanup.com.

Would you like more information about Kiwa’s services in the field of material research? Please have a look at this page.