Groningen Seaports, the organization that manages two seaports in the northern part of the Netherlands: Delfzijl and the Eemshaven, wants to make the energy supply of the local industry more sustainable. To achieve this, Groningen Seaports and plastic piping systems supplier SoluForce are working on a brand new infrastructure for the transportation of green hydrogen. In order to gain insight into the quality of the plastic piping system and its innovative application, SoluForce called upon Kiwa for consultancy and assurance. 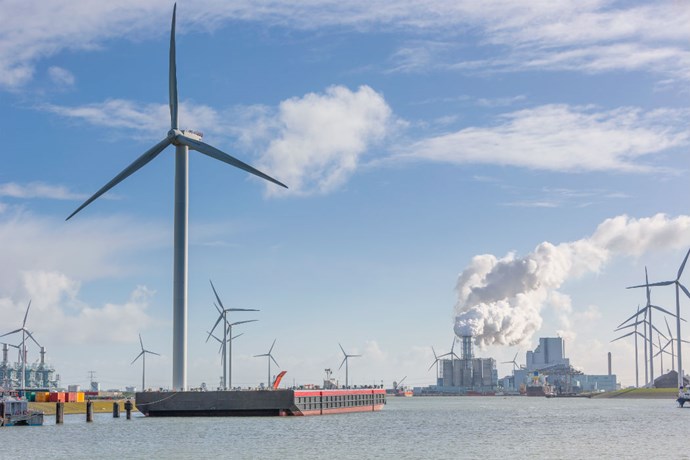 The infrastructure that Groningen Seaports and SoluForce are currently working on will be used to transport so called green hydrogen, produced with sustainable energy from wind turbines and solar parks in the Groningen seaport area. The use of plastic piping systems enables Groningen Seaports to realize, among other things, a considerable transport cost reduction. SoluForce’s M480GT/M570GT H2T pipe PN42 gas tight piping system will be used for high pressure transport of hydrogen.

Off course such an infrastructure comes with high requirements concerning technical and operational safety. And that is where Kiwa comes in. As an impartial party Kiwa has supplied insight into the quality of the SoluForce piping system and its application in Groningen Seaports' hydrogen network by means of a covenant. In order for Kiwa to draft and publish this covenant, SoluForce needed to prove the suitability of their product. Therefore, many technical documents were supplied and assessed. Any remaining white spots were investigated by Kiwa.

One of those white spots was the permeation rate of hydrogen through the piping system. To assess and measure the permeation was challenging, as the entire piping system had to be tested and not only specific parts nor by using foils. The tests had to be performed at 42 bar(g), but according to Meine de Vries, project leader from Kiwa, that was no problem. ‘We usually test tanks for the automotive industry with hydrogen pressures up to 1,050 bar, so we are perfectly equipped for pressurizing a pipe system up to 42 bar(g). We have all the capabilities and safety measures in place.’

The experts from Kiwa prepared all the testing and test set-ups. ‘So it was just a matter of connecting everything while taking all our normal precautions when working with hydrogen gas at high pressures’, says De Vries. But it did not stop at pressurizing the system. Jacket pipes filled with pure nitrogen were needed to accumulate the permeated hydrogen in order to quantify any permeation. These jacket pipes were closely fitted by Kiwa when at the same time engineers from SoluFroce made the joints and connected the pipes.

As soon as everything was pressurized, the measurements could start. ‘Thanks to our accurate gas chromatograph, we were able to measure the extremely small concentrations hydrogen permeating through the piping system’, says De Vies. ‘And then all the calculations start’, adds Kiwa’s materials scientist Ernst van der Stok. ‘It takes time before the steady state phase of the permeation takes place. The amount of hydrogen permeating through the SoluForce piping per day gives the permeation rate, but we were not even sure if we would get significant results within a few months’ time, because of the gas tight aluminum barrier layer.’

Therefore, just to be on the safe side, Kiwa used a second method by measuring the permeation rate of the adhesive. Ernst van der Stok: ‘The adhesive at the overlap of the aluminum is the only way for the hydrogen to pass the barrier layer. Eventually, we found that the measurements on the entire system worked fine, although the permeation rate is extremely small. So normally the system is indeed gas tight, although we were able to measure a tiny bit of permeated gas in our test set-up. It also gave a real kick when the calculations using the permeation rate of the adhesive corresponded very well to the actual measurement on the entire system!’

But not only permeation was a white spot, the effect of hydrogen on the materials was also not completely clear yet. The SoluForce piping system is resistant against very aggressive fluids and gasses’, explains Sjoerd Jansma, chemist at Kiwa. ‘And from our earlier research and from literature we know hydrogen does not affect polyethylene. But what about 42 bar(g)? We did not know yet, so we needed more confidence that we did not miss an unexpected effect.’

Therefore, Kiwa exposed the polyethylene liner material, the adhesive, the aluminum barrier layer and the reinforcement layer to 42 bar(g) of hydrogen. ‘Of course we used the permeation set-up for this exposure test, which was very efficient and effective and thus saved money for our customer. After exposure we tested the samples mechanically in our tensile tester, but no changes could be found’.

Now the installation of the SoluForce pipeline can start in order to transport hydrogen for Groningen Seaports in the near future. With extra trust created by Kiwa!