Please indicate your preferences
30 May 2022

Hydrogen will play an important role in the energy transition. In particular green hydrogen, produced using sustainably generated electricity, can become a sustainable replacement for natural gas in industry, mobility and the built environment. While concrete applications of hydrogen are already fully operational, there is still much to be discovered about the properties of the gas. At Kiwa, materials expert Sjoerd Jansma is conducting research into the phenomenon of permeability.

‘Permeation is the movement of a substance through a material,’ Sjoerd explains. ‘In, for example, a gas pipeline, the concentration of gas inside the pipe is, of course, higher than outside. Due to that concentration difference, the gas molecules want to move from one side to the other and thereby penetrate the pipe wall. The extent to which this happens depends on the substance as well as the barrier material and the conditions. In general, plastics are more sensitive to permeation than metals.’

Gas also permeates through the pipelines in our current natural gas network. ‘That sounds worse than it is. It’s a matter of very small quantities that also spread over considerable distances', says Sjoerd. ‘Only in special situations where the gas can collect and there is insufficient ventilation, dangers may arise. Safety risks as a result of permeation of natural gas are virtually nil. No permeation limits have been stated in international requirements or guidelines. But of course, you want to know as much as possible about this phenomenon and be able to quantify it, so that you can make the switch from natural gas to hydrogen gas on the basis of good arguments.'

Permeation of hydrogen through, for example, a pipe is measured by collecting the escaped gas on the outside. By performing gas analyzes over time, the exact degree of permeation is determined. ‘One of the measuring methods we use for this is gas chromatography. You inject a gas sample into a gas chromatograph that separates the hydrogen from the other gas components and then analyzes it. 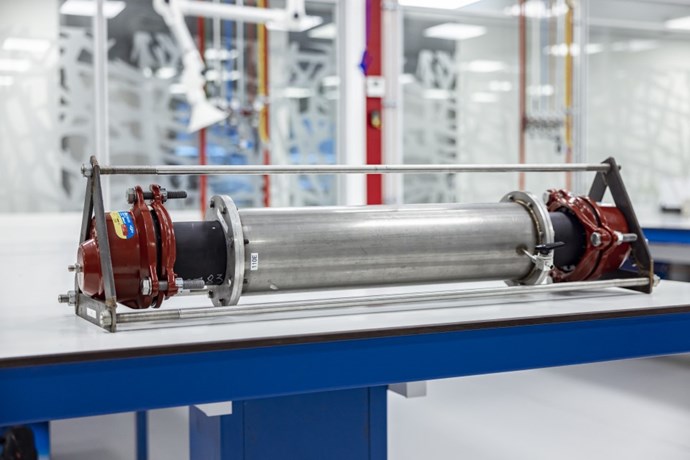 No more dangerous than natural gas

In 2018 Kiwa was commissioned by Dutch public utility provider Netbeheer Nederland to investigate whether the current natural gas network could be used for the transport of hydrogen. The research showed that this is very well possible after relatively simple adjustments. With this in mind, it is interesting to know more about the hydrogen permeability. 'Hydrogen is very similar to natural gas in many respects', says Sjoerd. ‘But there are also important differences. For example, hydrogen molecules move faster through a pipe wall than methane molecules. The volume that permeates is therefore greater, but the energy content is not. Permeability with hydrogen is therefore often no more dangerous than with natural gas. But as stated, this is depending on the circumstances and should be considered accordingly.’

To measure is to know

The fact that a greater permeation occurs with hydrogen than with natural gas may not lead to any problems, but it is important to find out as much as possible about this in order to fill in the gaps in knowledge about hydrogen. ‘Although the volume and energy loss due to permeability is negligible, leaked hydrogen does of course represent economic value. That is why also here the motto applies: to measure is to know.'

Sjoerd Jansma previously published the paper 'Testing spoolable reinforced flexible pipes and liner material for high-pressure hydrogen' (download pdf). Also interesting is the paper 'Modern PE pipe enables the transport of hydrogen' (download pdf) by Kiwa and Groningen Seaports. You can read more about Kiwa's research services here. You can also contact us, we will be happy to help you!